Will Your Life Savings Be Enough to Buy a Postage Stamp?

I couple of days ago I warned about the dangers of hyper-inflation as a result of the government Wall Street bail-out plan.  I think an example may help.  Take a good look at the following stamp: 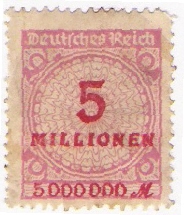 This is a postage stamp issued in Germany, sometime around the onset of World War II. The cost of the stamp was five million marks, the cost to mail a letter in Germany at that time. How did it ever come to that? It began with the terms of the Versailles treaty at the end of World War I. Germany was forced to pay war reparations to the Allies as punishment and compensation. With its economy in ruins and no way to maintain any cash flow balance, it had no choice but to simply print more and more money. This drove inflation out of control, eventually reaching the point where a simple postage stamp cost five million marks. As inflation soared, so too did unemployment. The German people were ready for a leader that offered them hope, and the stage was set for Hitler’s rise to power.

This is what happens to any nation that, for whatever reason, finds it necessary to print money to meet its obligations.  In Germany’s case, it was war reparations.  Today, for the U.S., it’s the cost of financing a trade deficit that now totals a staggering $9 trillion since 1975, as is growing by $700 billion per year.  (Hmmm.  Is it mere coincidence that this is the exact figure that Treasury Secretary Paulson has demanded to fund his bail-out plan?  I wonder if the next Treasury Secretary will request another $700 billion next year?  Watch for my 2009 Predictions.)

This isn’t a scare tactic.  This is for real.  The trade deficit has come home to roost and the only way left to deal with it is to begin printing money furiously, flooding the world with ever more worthless dollars.  Just look at what’s happening to oil prices.  Only a few days ago it was $91 a barrel.  It had fallen to that level because of the recession-driven decline in demand.  Friday, upon announcement of the enormous bail-out plan, it jumped over $10 a barrel – a one day record price rise.  Today, it soared over $16 a barrel, shattering the record set only one business day earlier.  Is this due to expectations of an economic rebound in America?  Of course not.  It’s due to the instantaneous decline in the dollar.  These kinds of price increases will continue and spread through the whole economy.

Paulson’s Big Give-Away to Wall Street Banks is doomed to failure.  There’s no way it can succeed because it does absolutely nothing to address the root cause of our ills – the trade deficit.  There’s lots of talk on Capitol Hill about modifying “The Plan” to include all sorts of things – more government oversight, help for homeowners, limits on executive pay and so on.  But without linking it to a requirement to balance trade by implementing stiff tariffs, it will all be for nought.

So hang on to your 401k, your IRA and any other savings you may have.  You’ll need it to pay for the stamp you buy to mail in your bankruptcy papers.

This entry was posted on Monday, September 22nd, 2008 at 8:28 pm and is filed under globalization, Trade, U.S. Economy. You can follow any responses to this entry through the RSS 2.0 feed. You can leave a response, or trackback from your own site.

2 Responses to Will Your Life Savings Be Enough to Buy a Postage Stamp?